A downloadable game for Windows, Linux, and Android

****Thank you everyone for the generous donations and purchases!  It means so much to us that you support our project!  Thank you so much!!!**** 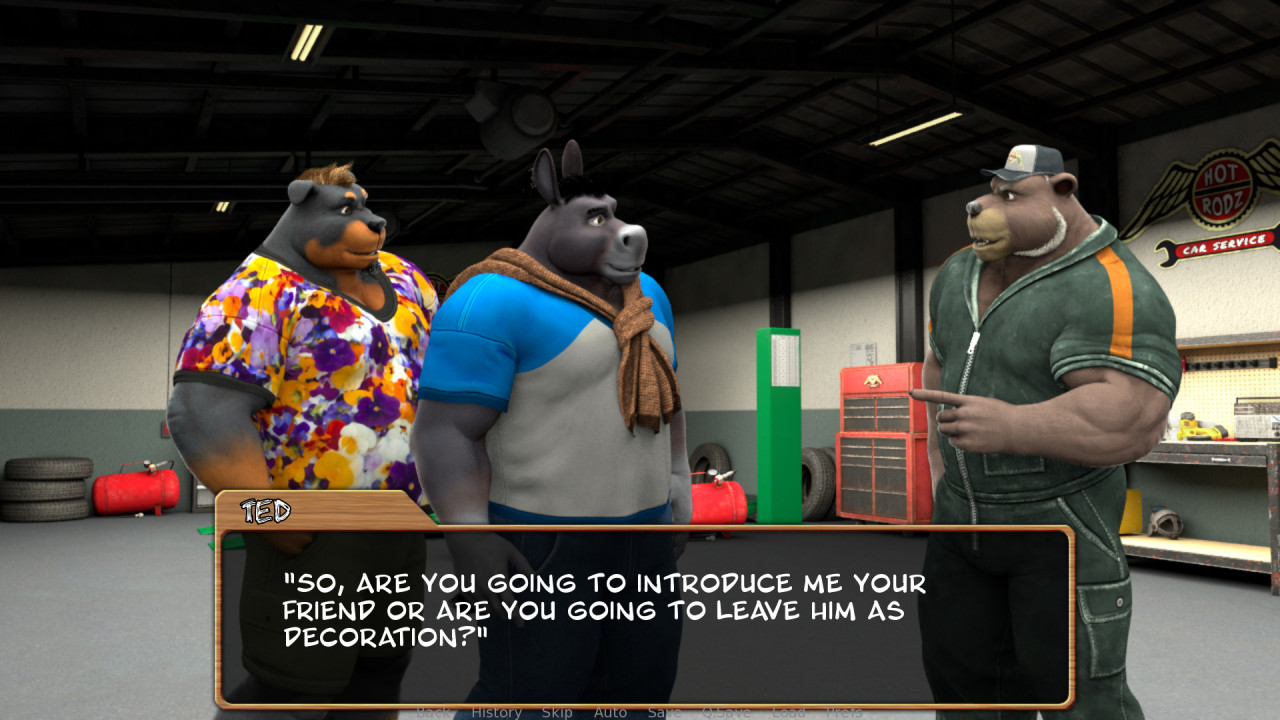 What's this game about?
Julian is living single in the big city.  He's been making a living as a novice photographer since the end of his college days, but he's ready for a change.  Can he find the change he needs at "The House of Beef"?

Take on the role of this shy introvert as his small world begins to unravel with each new day.  Can any of the various beefcakes help  Julian to come out of his shell, and see the big sexy picture?  You are armed with your trusty camera, and there are many experiences waiting for you at the House of Beef!

This project is still in development and being worked on by:

I'm just curious how long is the game so far?

I'm working on version 50 for Patreon this month.

I honestly don't know the answer to that question.  You'll have to time one of your runs and let us know.

Do you have Chinese

I'm having trouble loading a save game, am I the only one?

go and skiping till you read it...i have problem too with loading the saved game

Can i ask is there any sex scenes

When is the next Update??..

4 days ago have new update sugar

I hope you guys don't stop with this project too soon

Is there any sex scenes with the main character yet?

Remind me to show my thanks and love for the Sarge, he's right he wasn't the only one who always wanted to do that, what a treat and dream come true.  I'm so elated and I'm more excited than Julian.  Thank you! 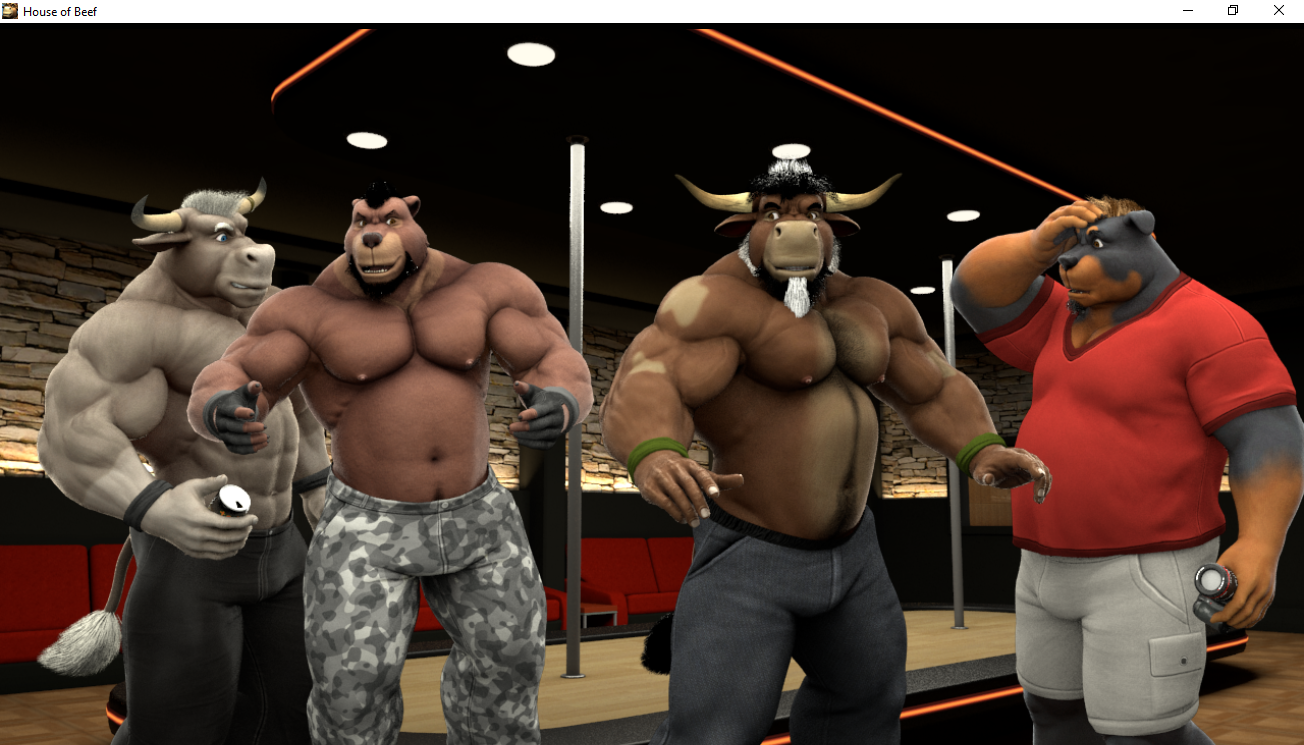 Thank you very much man! I'm glad you liked that one ^_^

I loved it.  Too bad it's not a dating sim otherwise he'd be the one I shoot for.  But this is beautiful, a perfect 2nd, to such a thing so thank you.  Thank you SO much from the bottom of my heart! 😍

Yay! Thank you very much again ^_^

@wolfstar when the new update? please release the date, because i can't sleep thinking the plot and the characters...

Next House of Beef update?  Let's see, on Patreon we're due to release version 46 by the 21st of this month.  As for  Itchio's public build, it should be available around the 15th.

@.0!
Um...may I humbly suggest playing some of my mate's VN?  "Extracurricular Activities" could hold you over until we update  =3

l began playing  Extracurricular  Activities  years ago, l believe it was build .32, then l found Sins and Paradise and began playing it. They were both my favorite novels every month for years. When l found out from one of Dynewulf's post last year that you were  together,  it blew my mind. Two talented  men who have enriched and entertained  me for years. Thanks for all the hard work y'all do.

Howlies bkbpcb,
I can't thank you enough for sticking with us throughout the years.  My word, you lift our spirits so and give us a sense of accomplishment.  Maybe we're doing something right after all.  Thank you kindly for playing  =3

I did not realize this was still updating. I'm glad because I was afraid that it was abandoned right when we would get some real plot. I'm so ready for more. Love that even though everyone is muscled there are still different bodytypes.

@wolfstar next update reduce your size in android pleasee....hehehe...

Chances are we'll be cutting things out at a later date.  Game size is nearly 2GB now  x.x

A great job for furry and bara lovers, hot, well done, and with beautiful characters! A MASTERPIECE!

Thank you kindly.  Luckily there's a lot more content coming, we update every month.
If you'd like to get the most up-to-date version, please consider joining Braford's patreon.
Build version 44 is coming soon!

I went to Patreon and support the creators there and get monthly updates. It is well worth it in my humble opinion.  The people are really nice and helpful with their community.

Looks nice but the apk failed to install and used 3gb of space on my phone anyways. Anybody know of a fix. Cache clear didn't work. And phone's not rooted so looks like I'm just stuck. Still looks like great game though.

I wasn't expecting much of this game. The CG art is a bit uncanny valley. The premise of Muscle Mary's as wholesome, friendly pervs didn't convince me.

But it managed to charm me anyway and i've grown to love this story.

Could we date Sarge?

When will the 1.44 version will be release? 😭🥺 im so frickin excited

This game delivers on what it intends to deliver. And that's a whole lotta BEEF! ^///^ I like how the story is progressing, while still keeping things sexy~ ;D my only concern is the file size QwQ When xou guys started this VN, it was just sliiightly over 1GB "^^_ and now? Eish... Is there anyway the size could be reduced?

For some reason i cant download it,it says it was "forbidden".

New public version was just released 3 days ago  =3
Next Patreon release has an expected release date on the 19th.

played what all was available on itch as of Nov. 24. Definitely looking for more from the creators. Loving the characters and  am getting involved in the story. Can't wait for more!

Glad to hear you're having a good time!  Our newest builds are available on Patreon, which is currently on version 40: https://www.patreon.com/Braford

Thanks for creating and sharing your games!

Does this have romance in it? Just curious about it.

There are a few scenes, but at this time, no.  There are plans for romance in the future.

Is it the latest version? I forgot which version I previously subscribed to

The latest version of HoB is 39 on Braford's Patreon page.

I can't believe Chester  in this game its totaly wow 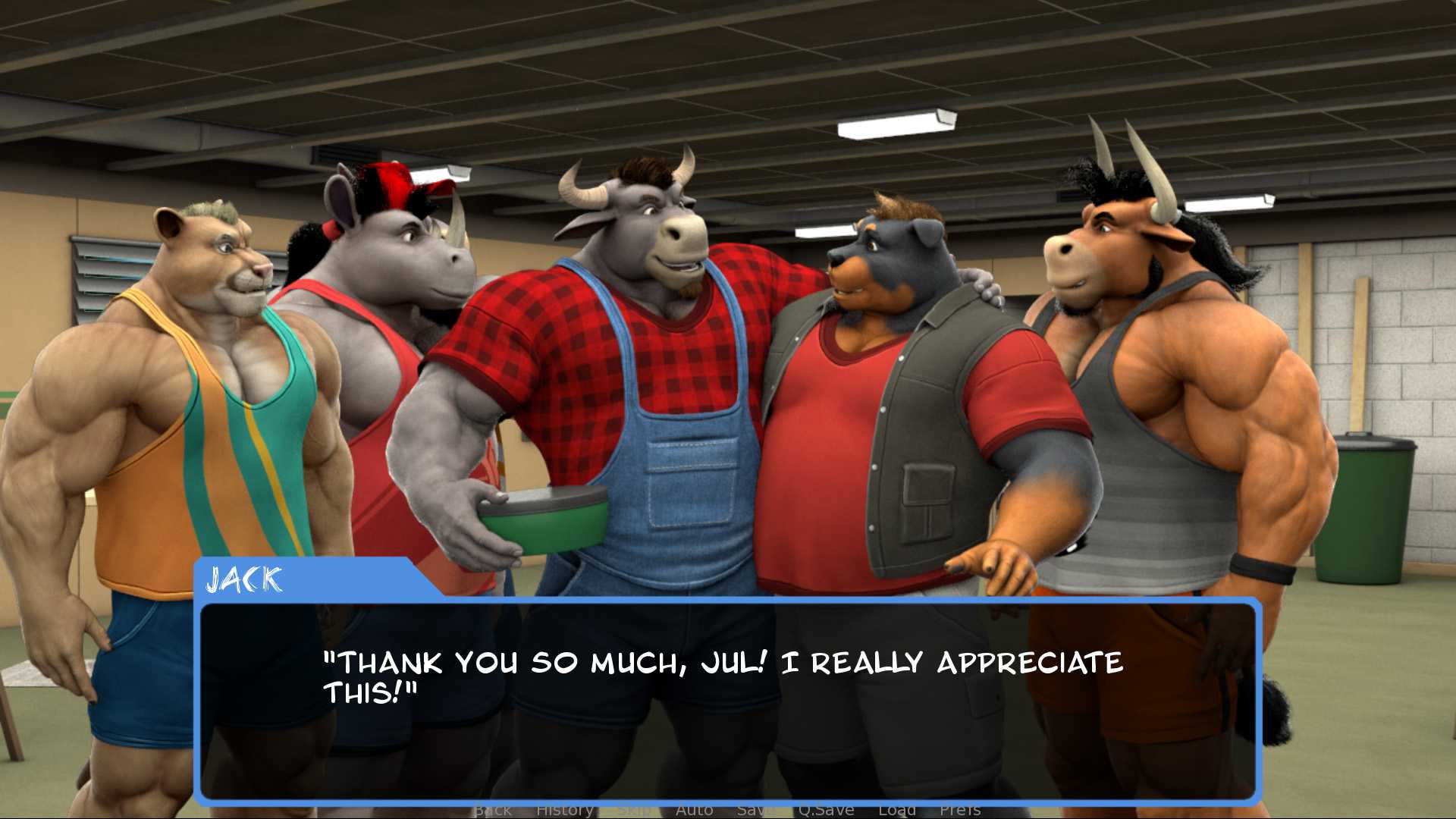 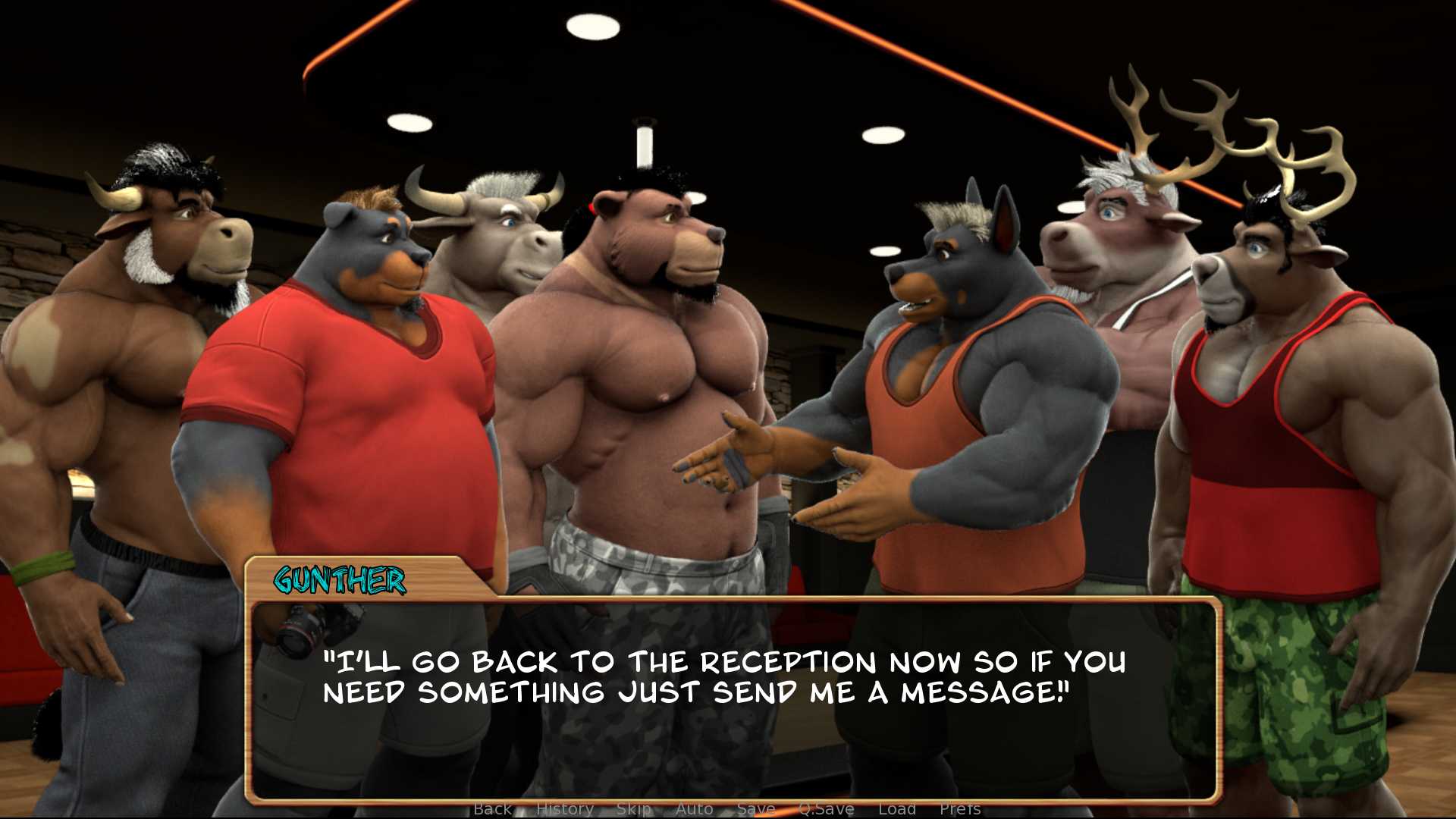 I gotta say I'm really loving this VN. I became a patron so I could get the latest version and was really surprised to see a 3D model for Chester Hayes from Extracurricular Activities show up.

I hope it's more than a cameo, though I understand that VN authors are protective of their characters. Hopefully DyneWulf and Bradford/Wolfstar can come to an agreements that this is a shared world and we will see both Chester and his Dozer more often here.  Of course that would mean that humans exist here too but we haven't seen any yet, maybe on the dance floor at The Bear Cave in the background?

They wouldn't need to be a big part of the stories, more like seeing them in the background working out, or something like EA Dozer talking with Jack out in the garden discussing things like bonsai or the possibility of putting in an onsen (hot spring bath) or a steam room at HOB. Chester could discuss cooking and recipes with Allen since he's a nutritionist.

There could also be some nice hilarious mix-ups with people getting confused between the two Dozers. I'd love to see EA Dozer as a 3D model and see the reactions of the other guys at the gym to his size (he gets referred to as a kaiju a number of times in EA).

The obvious cross-over is Spencer dancing in the Bear's Cave, 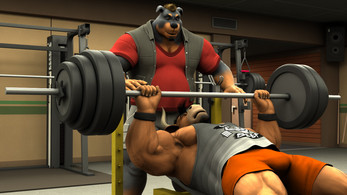 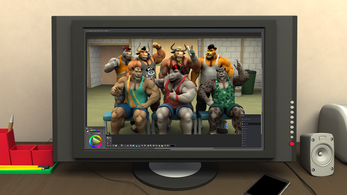 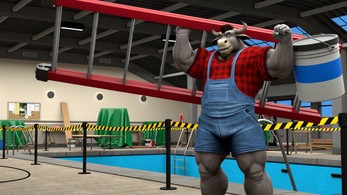 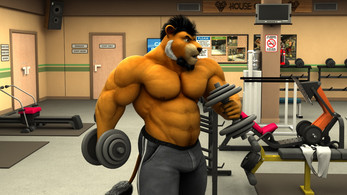 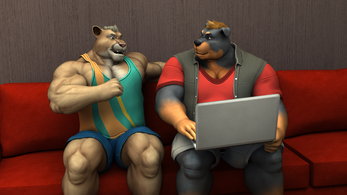 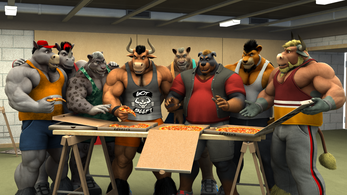